Well-well, I believe Etisalat,one of the top leading Mobile Operating network in my country Nigeria with its awesome 3G service had this particular phone roaming around ending of last year, not everyone one knew about this, though some that did get the gist, didn’t give it much attention, so the whole thing must have slipped out of mind by now, that’s what I will be sharing in this post, I will give us just a reminder of what you might be missing out from the exclusive package Etisalat had bundled for you and me, in its Android Smartphone.
According to their Website, they say it’s the Four Great Reasons to go Gaga. 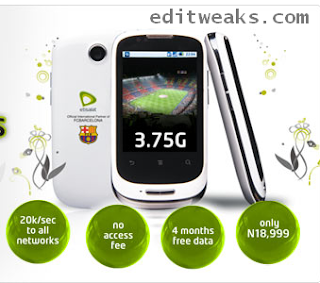 Having said much, I still want to conclude with the Best Part of the Package, like I said earlier Etisalat had bundled the whole thing for us, so they put some juicy freebies along with the Smartphone, as you buy it, you get:

If you want the Best Android and want to enjoy it to the fullest at a very affordable price, don’t hesitate to take this chance, the Offer is still Up for Grabs.
Got questions or few words to add? The comment box is Open, or  else, you can at least hit the Share buttons below to help your friends that love Android get the information.

1 thought on “Etisalat Android Smartphone, Still Don’t Have your Own?”