Why Windows Phones Are Playing Catch up To iPhone and Android

Windows is lagging behind in the market, but with the awaited launch of Windows Phone 8, there is still hope. Although announcements have not been made, there doesn’t seem to be anything to give Windows the edge on its counterparts; but is there?
Apple and iPhones are firing ahead with the latest technology and the impressive number of apps and features available to users. Android is fighting back and is due to release the latest OS in the next few months. What is Microsoft doing?
There is the new Windows Phone 8 of course; this is in keeping with the times, but doesn’t seem to offer much more than you can already get from an iPhone or on Android. The phone will be released later this year and there is still speculation as to whether there will actually be anything unique to Windows coming with it. The ‘catch up’ rumour is bought about because it seems that the new device is simply catching up with its counterparts as opposed to bringing something fresh and new to the market. 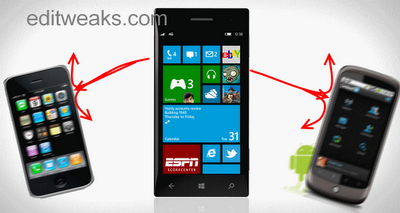 What can you expect from the Windows Phone 8?

There will be support available for phones running dual-core processors and HD screens, but not much else has come to light as yet.

Windows 8 and Windows Phone 8 will be moving forward, regardless of the negative rumours that are around. Moving forward is better than staying still after all. They are bringing competition to the table with Live Tiles – the Windows alternative to the Apple grid formation on iPad’s and the recently released Mountain Lion OS. It has taken them a while, but they are updating features in this sense and Windows users will be released to see the more modern or up-to-date features.
The downside to the new Windows 8 OS is that is won’t be compatible to older devices so if you want it, you will have to buy the latest device as well. There will be an update for Windows 7 devices, but this will only give the user the ability to customise the Start screen.
It is important to note that although this is how the new Windows 8 OS is being portrayed; the actual facts have not been announced so Windows could secretly be laughing at the negative speculation and have something really cool up their sleeves! Hopefully, there will be a few features that can give Apple and Android a run for their money.
Windows phone is closing the gap between its OS and the leading players. This is going less noted because they are moving slowly, but steadily. The platform may be a bit behind the times, but they are certainly making the effort to catch up and stay in with the game. The amount of catch up they are doing is great, but there is still a long way to go. If they keep it up, they could be a threat to the dominant iPhone and Android market.
Windows is quickly catching up with Blackberry and is set to overtake them if they continue the way they are going. This would bring the Windows phone into 3rd place as far as the mobile market is concerned and a very powerful place to be. Catching up with the latest technology is imperative for Windows to get the attention of the required audiences out there so they are on the right road.
The Windows 8 Phone should, but just about the right amount of progression that they need to push them ahead of Blackberry and all they can do is wait to see. If Windows 8 has those key features that will make it a tad unique and offer something a bit different from the features of the iPhone and Android then they really could see the difference quickly.
It is a waiting game now and all users can do is be patient to see what Windows has that can make their OS better than the rest.

GET FREE DOMAINS at Ahmsta Tech

10 Reasons Why You Should Be Excited For Microsoft's Surface Tablet

MMobile
Well-well, I believe Etisalat,one of the top leading Mobile Operating network in my country Nigeria with its awesome…
AAndroid
INFINIX Smart (X5010) Reviews, specifications and price– Infinix is serving up something new to young fans across Nigeria.…
RReviews
In a country filled with Life, too many Activities and plans to be carried out by the average…
AAndroid
Infinix Mobility Developers Team have rolled out their First Software Update on the Infinix Hot X507’s Operating System…
MMobile
Your mobile network may sometimes be unable to provide you with settings for your phones via SMS, even…
RReviews
iPad mini, Kindle Fire HD and Nexus 7 have to fight it out with their best abilities to…