iPad Mini vs. Kindle Fire HD vs. Nexus 7: Why it is called Battle of the Tablets

iPad mini, Kindle Fire HD and Nexus 7 have to fight it out with their best abilities to remain in the competition as the battle among the tablets have already begun. At present, the potential clients who are looking forward to invest on a new tablet have these three newest options at their disposal.

The major competitors of Apple’s tablet that is Google’s Nexus 7 and Amazon’s Kindle Fire HD have been able to win the first round of the battle by introducing their tablet at a much competitive price which has all the advanced features that are present in Apple’s tablet. Therefore, by applying this strategy they have been able to create a successful list of fan followings. This has lead the entrepreneurs of Apple to invent means whereby it will be possible for them to launch a product that is available at a competitive price and the answer was iPad mini which is smaller in size than the usual Apple tablets but have most of the features of iPad and iPad 2. 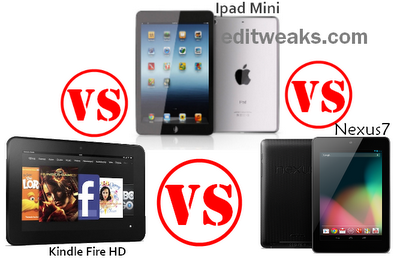 As these three major computing brands continue to battle it out amongst themselves for capturing the market of tablets, one important facet over which war is being waged is the applications compatible with this product. At present Google has given a tough challenge to its competitors in this genre as it has the largest variety of applications to offer to the potential clients. Although a variety of applications available with Kindle Fire HD and Nexus 7 as well but it is nothing in comparison to the ones compatible with Apple. So Apple is definitely in a win-win position is this respect.

All the Apple products are developed after intensive market research to respond to the needs of the consumers. In this respect as well Apple has won the battle as they have been able to correspond to the demands of the market. The consumers are in need of easily manageable computing device which they will be able to carry easily along with themselves to serve their need. Thereby the developers of Apple’s iPad have decided to further reduce the size of the product to about 7 inch, whereby they can easily carry it along with them.

While the iPad mini is not yet released and we are only contemplating about its various features; Amazon’s Kindle Fire HD and Google’s Nexus 7 is making the most of its late arrival. But in between the two options available to the potential clients at present there exists a tough competition. One facet based on which Kindle Fire HD has an upper hand over the Google’s tablet is the picture quality. Amazon’s tablet has a far superior picture quality in comparison to the Google’s version of the same device. Moreover the storage capacity of the Kindle Fire HD is far better in comparison to the Nexus 7. These are two factors that have given Amazon’s tablet an edge over the other tablets especially owing to the fact that Kindle Fire HD costs less than the Nexus 7.

Thus a fully fledged battle has been declared and the main contestants are doing their very best to create a niche for themselves by introducing new and advanced features and offering them at a much lower price.

HHow To
Are you looking to ship an item or package to Nigeria from USA via USPS? Perhaps it’s something…
GGuides
Innovation in mobile phone tracking technology allows business owners and parents to track the whereabouts of their employees…
GGadgets
It is going to be a nightmare if you suddenly stop using your mobile phone. You are used…
iiOS
iOS 10 release date is coming nearer, and beta versions of the new iPhone software have already been…
BBlogging
In order to achieve the online success, you are supposed to understand its fundamentals, which states that you…
iiOS
Every time we open our smartphone’s camera, our intention is to take a photo, to capture moments or…