The sleek new iPhone 5 that is a lot thinner and lighter than its predecessor the iPhone 4. This touchscreen based smartphone was developed by the makers of the iPad, Apple Inc. Released about a month ago this sixth generation device has stormed the markets across the world. The screen is larger than the previous model at 4 inches and the dock connector is smaller with eight pins. It is powered by the Apple A 6 processor 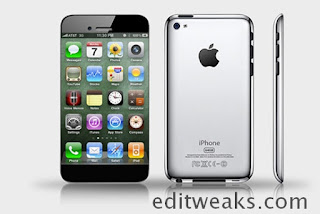 The iOS 6 operating system that powers the iPhone 5 is the latest version. The screen is certainly bigger and the internal components match the exteriors. This phone has a new Maps application that should prove to be handy for people who are on the go constantly. The user interface of the operating system can be operated by multi-touch actions. There are a series of buttons assigned various task as are the sliding mechanism and the switches

The patented gestures like pinch, swipe, tap and something called reverse pinch all have functions of their own. When you wish to undo a command a simple shake of the device will accomplish that. You can have access to the app store and surf and download several applications from iTunes Store. The phones Internet can be share over Wi-Fi, Bluetooth and through the USB. Though most of the features will work in specific areas to start with, Apple promises to extend the same to other areas over a period of time.

This smartphone can serve as your companion that plays music, movies, streams videos, programs on TV, Ebooks, and radio podcasts as well. It has the intelligence to sort the collection you acquire by genre, songs, albums, artists, composers and playlists. Options allow you to easily locate what you want as they are arranged alphabetically. The playlists however, will remain in the order they get downloaded from ITunes.

It is empowered by a virtual assistant that you can speak to and expect to receive answers. Voice commands from you will be responded in a like manner. To access Siri as the virtual assistant is called you just need to press the button and hold it down. Even texting can be converted to a speech format with the aid of the voice assistant. There is also a special feature called iMessage which is an IMS or instant messaging system that lets you chat with your friends who also posses Apple devices running on iOS 5 or 6. Apart from text messages you can also send and receive images which makes it all the more exciting. There is a keyboard that appears on the display and can be used for texting apart from the voice commands that it follows. The built-in spell checker comes in handy when you are in a hurry.

The built-in Maps feature works on turn-by-turn spoken directions. Some major cities can be viewed in 3D. The Passbook app is really very handy and you can retrieve boarding passes, coupons, tickets, and loyalty cards. It is intelligent enough to alert you when you are near a store, the coupon for which is in the app.

A range of storage capacities at 16, 32, and 64 Gigabytes similar to that of the previous version is available in this one too. It has a similar camera with 8 MP and a low-light performance feature that lets you capture great pictures even in poor lighting conditions. On the whole the Apple iPhone 5 has had rave reviews till now.