“Seek and destroy” – this is the first phrase that comes to my mind when I see that there’s no free disk space left. Whatever capacity your drive has, sooner or later you’ll encounter the problem of searching for the problem folders and files that have consumed your disk space.

It’s no use relying on automatic programs like CleanMyMac or MacKeeper. Very often the only thing they do is just cleaning system code, PPC code, localizations, etc. At best it will free some 5-10 Gb of disk space. And what to do with backup files, FullHD movies, apps’ distributives, music that can move around the drive? And don’t forget about temporary Final Cut files and backups for your iPad, that after some time grow bigger and bigger.

In this situation your way out are disk space visualizers that will help you to find out problem zones and get rid of all unnecessary files.

SUNBURST METHOD – is realized in the DaisyDisk. Among the advantages of the sunburst method I can name good information perceptiveness and keeping the integrity of model’s structure when the information on a drive is changed. The disadvantages of this method are inability to compare visually the sizes of sectors on different levels and not a full use of window area.

TREE MAP – is realized in a nother popular Mac program called Space Gremlin. This method represents a tree-like file structure in the form of rectangles of different size that correspond to the space the object occupies. The advantages of this method are more effective use of application’s working area and more convenient visual comparison of several objects. The disadvantages are worse perceptiveness (in comparison with the sunburst method) and navigation in general.

DaisyDisk is the most popular disk space visualizer at the moment. The first thing that draws your attention is the appearance of the program and the speed of its work. The main working area is occupied with the model of the drive, while on its right there’s a legend area. 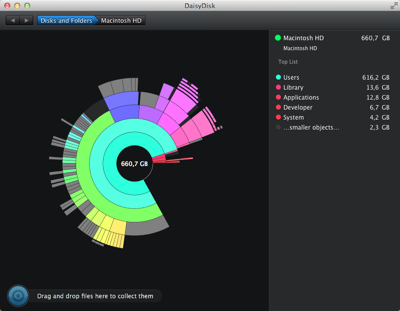 Navigation can be realized both with the help of a model or of a legend. It should also be mentioned that the legend automatically changes depending on what sector of a diagram your cursor is now. The model and the legend reflect only big objects and folders while all small ones are hidden under the link “Small objects”.

The move among the sectors is really smooth, with beautiful animation. I’m not sure that any other app of such functions can boast of it. Any object can be viewed by pressing standard “space” key. All deleted elements are moved to the inner Recycle bin. 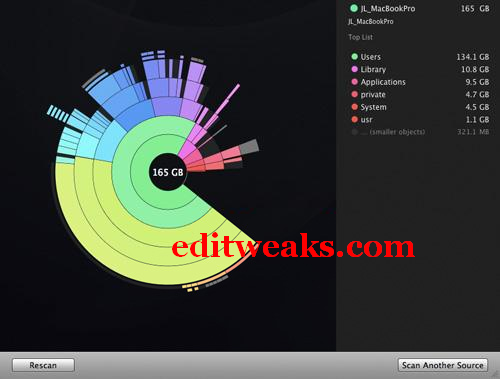 It’s also worth noticing that the app is provided into two versions.
The first one is available for download from App Store.
The second one – from the developers’ site.

The difference between these two versions is that the version from App Store doesn’t support administrator mode, and that means that this version can’t work with system folders and sections you don’t have access to. The version from the developers’ site allows you to see not only your folders, but also the folders of other users.

From my personal experience I can tell that this app has helped me to find the hidden files that occupied really a lot of space and at the same time were useless. For example, I deleted the folder “MobileBackups” where the copies of Time Machine are kept. Also it found some of the “lost” House M.D. series in HD-quality, old and “heavy” iPad apps and games I didn’t use, etc

Change and Display Webpages in 3D with Mozilla Firefox

Great Tips to Improve Your SEO Rankings through Social Media

HHow To
When Microsoft released Windows 8 they knew it would cause a storm amongst critics and divide experts as…
HHow To
Deletion of Blogs is a normal thing anyone on Blogger can do for several reasons, just last week…
BBlogging
As a Blogger, I had been in several cases whereby after Publishing few Posts, I run out of…
HHow To
We live in a world where communication at its best is always needed, regardless of where we are…
HHow To
Repair or Changing the IMEI of your MTK / Android is now possible, this includes for MTK 6577…
HHow To
Since Mortal Kombat X Mobile for Android went Viral in April 22nd on hitting the Google PlayStore, many…