The Brand new mobile devices recently released by Samsung’s flagship, the Galaxy S5 and The Galaxy Note 3 Neo which are currently selling Online/Offline stores, and are highly anticipated all over the web right now have been brought together for Comparison.
Here now, We’ll be having a closer look at their Specifications, I mean what they are really made of.
Secondly, I, (Your Host) now attend Gadgets Live-Previews, with that I’ll be telling you my Honest experiences with these phones.
Thirdly, you’ll get their Best prices.
Finally we’ll round-up, through your comments, we’ll be getting to find out, how it had so far suited you, the End-users of these two appraised devices after you bought them
We are straight, let’s Compare both : 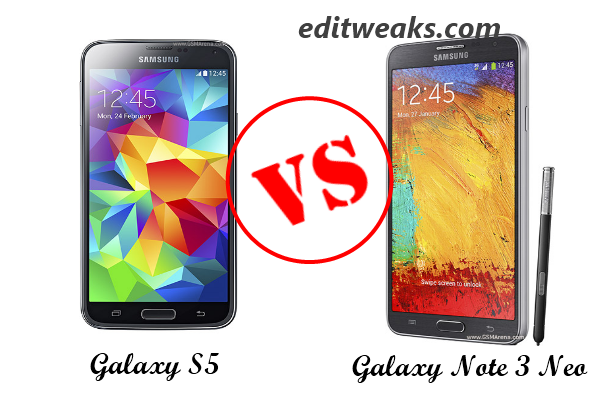 They both run Android OS,
They both have same Display properties to be Super AMOLED capacitive touchscreen
They both use Micro-SIM
Also they share few same Data Properties, as they both are 4G LTE, 3G (HSPDA), Bluetooth and Infrared enabled.

Apart from Weight, Dimension and Data, there are very noticeable differences between these two devices

With Galaxy S5:
I personally got my hands on the New Galaxy S5, touched it, felt it, navigated the Menu, and even had a one-on-one experience with a Samsung Galaxy Official, where he threw the phone into a bowl of water, just to prove to us the audience, that it was truly WATER-RESISTANT! I capture that part very well.
With Galaxy Note 3 Neo:
Although I have No personal experiences with this device yet, (I will surely get my hands-on soon), The Galaxy Note 3 Neo is an excellent Option that’s cheaper if you’ve always wanted a Galaxy Note 3,

Neo is ALMOST SAME, yet lower type of Note 3.
Unless you pay attention to detail, you won’t notice any difference in the size and weight between a Galaxy Note 3 and a Neo.

We have seen the differences up there, the processor in our New Galaxy S5 is higher, enabling it to be faster at multitasking than Note 3 Neo.
Talk-back Comments from Note 3 experience-users still say the new Galaxy S5 still doesn’t beat their Note 3 devices, despite the water-proof and higher camera pixels features, (most still believe Note 3will run faster than Galaxy S5, since Note 3 has 3GB RAM, and new S5 came with only 2GB RAM).
For this reason, fans who were held back from buying Note 3 because of the Price may now go ahead and get a Galaxy Note 3 Neo.
We would like to know what you think about these smart devices, meanwhile if you’d like to own them,

The devices are available nationwide and delivery takes just 2 – 8 days.

Why does Spy Earpiece Appear among the Devices that Help to Pass Exams?

AAndroid
Google back in September introduced the first set of Android apps for Chrome OS via its App Runtime…
AAndroid
Infinix Zero 4 will be a successor of the Zero 3 which was a very well acclaimed smartphone…
SSecurity
This malware seem to have already gone viral and out of control, targeting over 850,000 Android devices that…
RReviews
Many of us already know the Ecommerce website Jumia Nigeria, is performing great at giving the Best Prices…
HHow To
EXTRA TIP UPDATED   This is a follow up from our Previous post: Some devices are different and…
RReviews
Honestly speaking, it is just not right to put un-necessary restrictions on someone and try and put them…