Hi there, today we’ll be Unboxing and giving you our Hands-On Review of the new Infinix Zero 2 ( X509 ) smartphone which is still selling fast in the market right now.

The smartphone launched around end of May 2015 and began circulation in June, we published the Infinix Zero 2 review back then and received our copy over 3 weeks ago, this review was supposed to have been published since, please accept my apologies if I had kept you waiting to see it, I fell ill (serious Malaria) all this period, thank Heavens I am healthy and Strong again, so let’s ride On 🙂 !

First, I’d like to tell us that the new Infinix Zero 2 is indeed the Next Hero like it’s been tagged for months when everybody was Anticipating it. 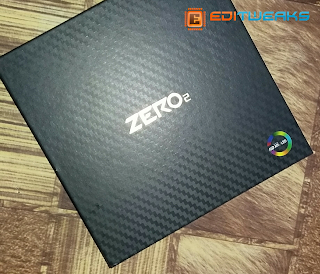 Let’s Quickly Flashback to the specs

Key Specs of the Infinix Zero 2

The Box is square in size, painted in black, gold and lemon colours. A nice blend of colours that signifies the model beholds quality.

FROM INSIDE THE BOX
After Unboxing the pack, we found the Smartphone, and another small Lemon coloured box in the pack, this small lemon box contained the User Manual and few accessories for the smartphone, i.e
– USB Cable,
– Earpiece jack for calls and music
– and Pin for opening your SIM and Memory card Trays.

Other Accessories in the main pack include:
– Adaptor chargers with two different connectors, so you have option to choose which to use depending on your Wall Socket or extension, this was quite thoughtful of the Infinix Team. 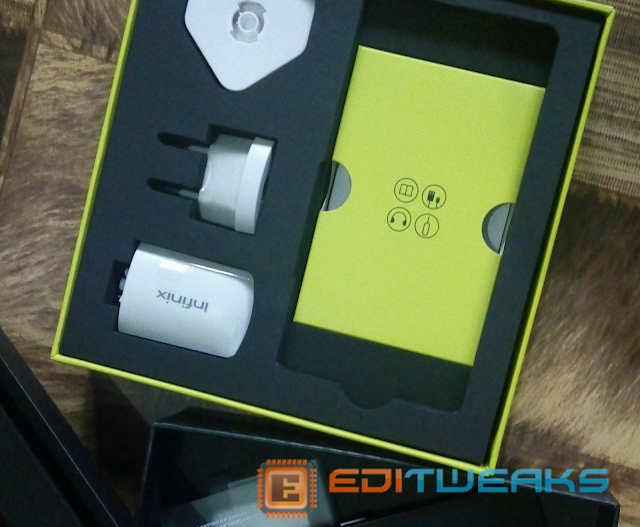 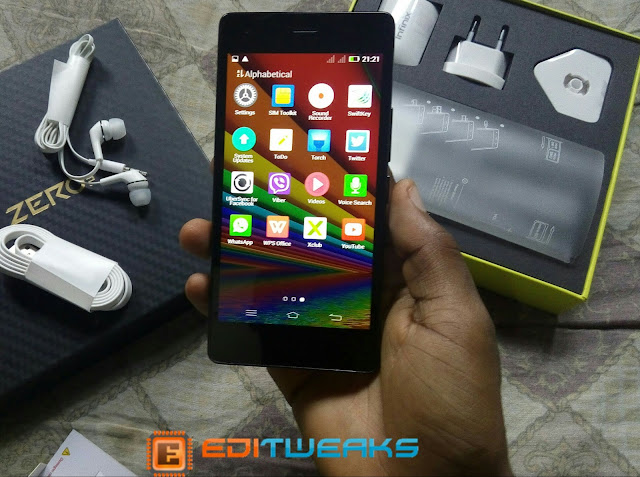 The 5 inches screen is Amoled Powered, this enhanced the display, making it crisp, sharp and well detailed with its display colours.

Holding the device, it gave an elegant Premium feel, another fact is the smartphone is very Light and pretty slim (118gram in weight).
Like we told you once, it comes in two Memory Versions, 16GB and 32GB ROM, and in various Colours:  Milan Black, Red and Gold. We got the Milan Black, 32GB ROM. 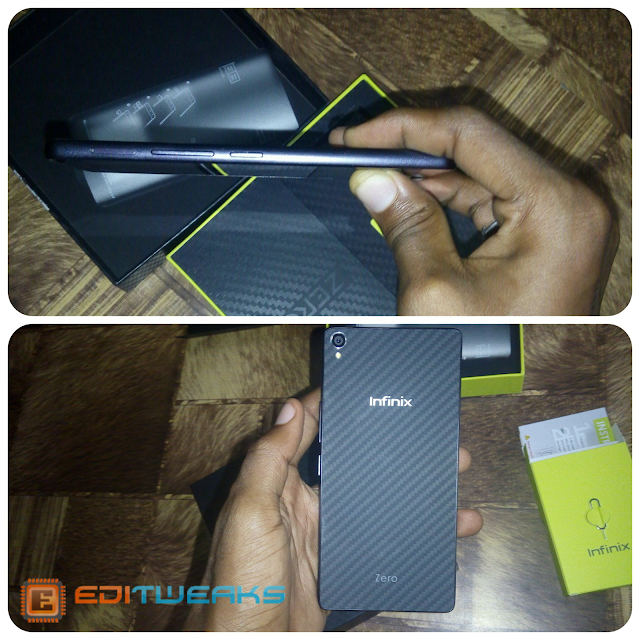 THE DESIGN AND OUTLOOK:

Having a Body dimension of 145 x 71.2 x 6.7 mm, the smartphone comes fully Protected, the screen was built with Corning Gorilla Glass 3 and all over the Backcover is the Kevlar Body, this is superb strength and protection, unlike the first Infinix Zero that came with Glass backcover.
The idea of the Kevlar body (material used in making Bullet proof vests) in Zero 2 remains intriguing!
The backcover has diagonal pattern designs and is very smooth with its 13MP Camera located at top Left side of the back.

At the Top of the device is where you’ll find the USB and ear piece Ports. I had to go out to take photos of the device in daylight so it will be very clear for all to see. 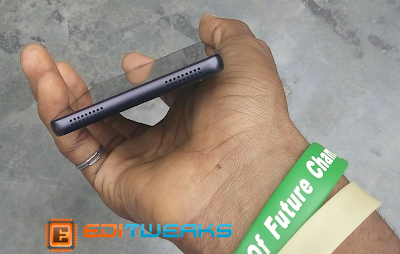 The Speakers, two of them, are found at Bottom of the Smartphone. So the sound will remain the same quality even when you place the device on a flat surface.

At The Right Side you see Memory Card Tray, Volume buttons, and Power Button.
By the Left side, you’ll see the SIM card Tray, all of the trays can be Opened using the Pin that’s on Lemon box in the pack. 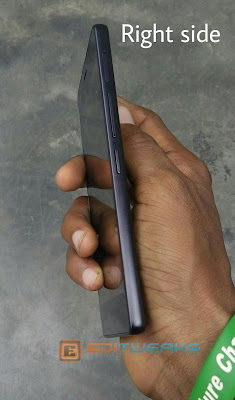 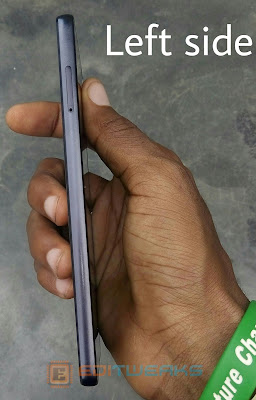 From the Front, the display was really cool, with a very nice First impression, it doesn’t take time for the Smartphone to boot up. The 5MP Front Camera is found at the Top Left, and Light Sensor by right side.

The user interface was simple and neat, the Soft keys comes Pre-embedded in the Screen, (probably first time Infinix team is producing such).
The Screen is 5 inch in size, with a 720 x 1280px HD, display density of 294ppi Powered by Super Amoled screen. It’s simply great. 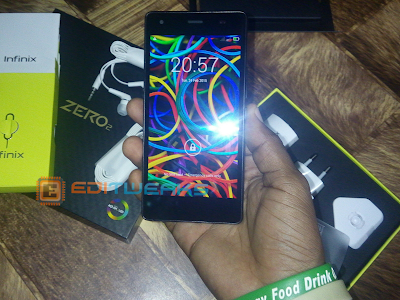 THE OPERATING SYSTEM AND PERFORMANCE:

The smartphone took only a few seconds to Boot up, with a 2GB RAM and 2.0 Octa-core processor, it runs on Android 4.4 Kitkat (expected Android 5.0 Lollipop upgrade coming on the device soon), this means it will smoothly run any App and HD Games you install on it. Meanwhile the smartphone runs very fast, multi-task and perform all your activities with it without lagging or hanging.

A BENCHMARK OF INFINIX ZERO 2 ON ANTUTU : 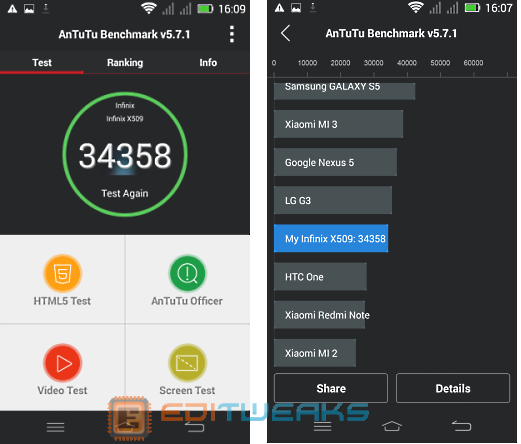 According to the Test, Infinix Zero 2 is right under the new LG G3 and sits on top of the almightly HTC One and two other Xiami smartphone models, these are strong brands but Zero 2 beat them. This test proves the Inifnix Zero 2 is a Powerful device with splendid 2.0 version U.I. 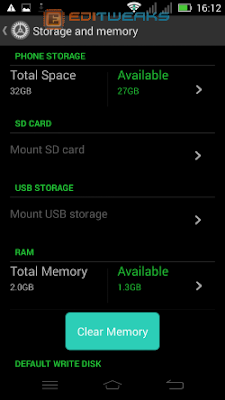 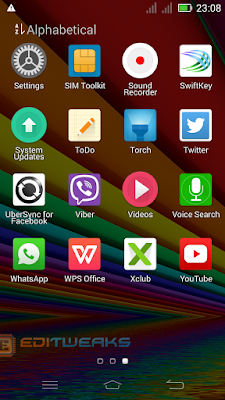 Probably one of the most vital part of every smartphone, Infinix Zero 2 is completely an amazing device, the Battery is 2,300mAh (non-removable) battery, although not everyone likes the capacity, honestly, Many expected the smartphone to come with Capacity from 3000mAh or above and a Fast-charging support like the HOTE NOTE PRO, but as the case is with Zero 2, if you’re a heavy user like me who always use 3G internet, you’ll surely be needing a PowerBank to keep it alive.
Although there’s a BATTERY SAVER Feature in the smartphone, once activated, this should Optimise and make your battery last longer.

The Infinix Zero 2’s 13MP Rear Camera’s got quality, took a few pictures with it seen below, the 5MP front camera is simply cool as well, with Wide range angle which captures more objects widely, like your Selfie with friends, the front camera is pretty very clear for video calls too.

We may have been expecting better battery and in my opinion, an LED light and pre-installed Lollipop 5.0 OS on the new smartphone, I would have really appreciated to see that, Kitkat is now too popular and becoming old, although like I said earlier Infinix had told us that this Lollipop Update would be around anytime soon.
However, the new Infinix Zero 2 is indeed the next Hero compared to its predecessor that came with 1980mAh Battery. The Kevlar body, strength and lightness of Zero 2 is really also a strong and unique innovation.
And looking at the screen, the last time I checked, this is the same Amoled Powered screen found in the new Samsung and HTC smartphones which are very expensive brands right, Infinix Zero 2 seem to posses same quality, very unique High-end features yet at an affordable Price

HHow To
For one reason or the other, we don’t want any other person to see all the Files…
HHow To
Finally, I decided to move to the top trending smartphone OS in the world right now, Android, so…
BBest List
The year has been an adventurous and interesting one for smartphone lovers in Nigeria and the world in…
AAndroid
Vividly, we recall the first software updates that came to Infinix Hot X507 few months ago, there were…
HHow To
Unlocking bootloader and rooting HTC One E8 is really simple after following the steps we personally used and…
GGadgets
With the continuous improvements of broad band technologies, At our various homes, place of work or some well…