This is probably the review you had been looking for, with photos, benchmarks and everything about the Infinix Zero 3. Unlike this previous post (with no photos looks boring huh?).

Well, we finally had gotten our hands on the smartphone and spent days with it, so this hands on review won’t be as the first although the first review was quite useful since it provided first hand info about the Zero 3 phone since last December 2015 that it was launched.

Infinix Zero 3 is the phone that the Infinix Mobility team had exerted much energy to come up with looking at the new premium features and price, it’s quite more expensive than their other models they released.

The Appearance and Design: 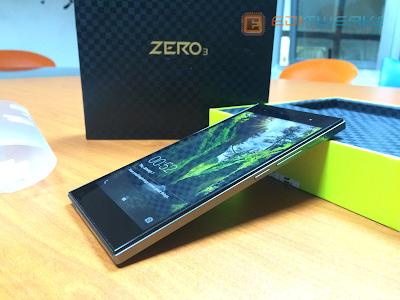 The box had same good looking design and size like its predecessor, Zero 2, but after seeing what’s inside, the first impressions given by the Infinix Zero 3 is different, the device gives a blend of the first Zero and Infinix Hot 2, you’d also notice that they maintained that very light weight from Zero 2, so we may say, Zero 3 is a combo of those 3 previous models.

The Back
The back feels very smooth, similar back desgin on Infinix Hot 2, on Zero 3 you can’t say what the cover is made of, (plastic or glass?) it’s not the type that easily scratches, it also has a different kind of pattern that is more mature, it’s a nice back but still we think the Manufacturers would have done better design on the back of the device without hurting that Infinix-Zero-shape they were trying to maintain.

The Speakers are at the Back, (I’m sure many people prefer speakers to be placed underneath it).

The device’s Micro SIM Tray is found on its left side, SD card is at the right. 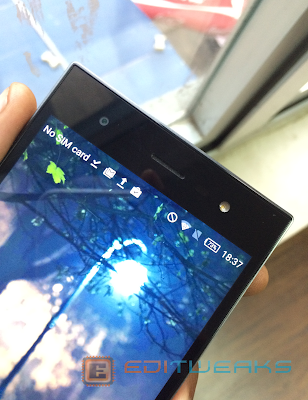 Zero 3 features a 5.5 inches display, the biggest in its series of Zero phones, pure 1080p resolution with density of 400ppi protected by Corning Gorilla Glass 3 which is really clear and detailed at its colours when it came to watching videos or photos, and we learnt you can shoot 4K videos with its camera, let’s go there…

You know? 20.7MP is something deep to talk about…

The camera’s Megapixel rings bells every time we tell people about the Infinix Zero 3.
20.7MP is plenty as a figure, but can it really produce “extra” sharp photos? You tell us after seeing the photos.

How the smartphone automatically focuses on Objects is really fast, impressive and its even sweeter when all you have to do is tap the object you want to focus on.

See these 2 photos below:
In the First I focused on my hand, every other thing at the background automatically blurs:

The second photo, I focused on my legs… in less than a second it focused sharply despite they were farther away from my hands and the camera. All done with a single tap before taking the photo.

And of course, More Photos:
The Photos I took below were taken at Normal modes, no edits, just natural lights.

The Camera is interesting as it can be optimised and tweaked to give you the picture quality or colours you desire at almost anytime, you will achieve this when you play around the options when you launch the Camera. 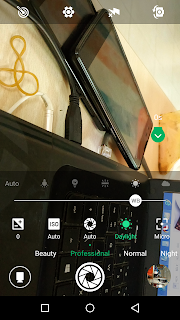 THE SELFIE CAMERA
The Selfie Camera on Zero 3 is quite superb, the NORMAL MODE is sharp, it equals to its 5MP Megapixel, a little glitch I noticed was a strange coloured line that cuts across photos I took with it on NORMAL mode, See it below
You notice the line underneath the eye? click the photo to zoom in


I don’t know if it’s ONLY mine that had that crossing lines or it’s a general bug. I hope there’s a fix, it’s not so obvious to worry about anyways.

Next, we activated BEAUTY MODE, below
Uhun! We know you will prefer this one to my own selfie:

As with other recent Infinix phones, the Zero 3 uses XUI, their User interface based on Android 5.1 Lollipop which will likely be upgradeable to Android M.
Something else you would like about the UI is the provision of many custom fonts and decent wallpapers that changes every time the phone awakes.

The most touching part is each of the Wallpaper contain unique Quotes that will inspire and keep you going. 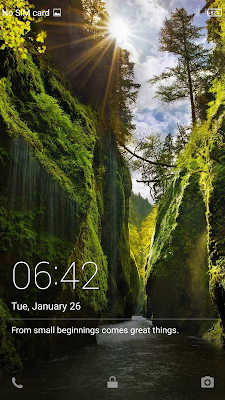 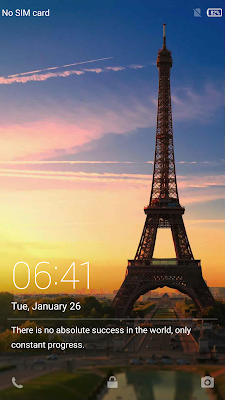 Infinix Zero 3 features a 3GB RAM and 16GB ROM that is expandable to 32GB via memory card, it’s good to know Infinix isn’t going below 16GB on their new releases and well, if you ask me, I’d say they should have made a 32GB as seen on Zero 2 here. Guess they have their best reasons why they didn’t produce a 32GB ROM variant.

BENCH MARK TIME.  Let’s compare!
The BenchMarks Zero 3 scored can compete the New high-end expensive smartphones, it also beats some popular smartphones that had been released in 2014, this was achievable with a Single Core from it’s Helio X10 Octa-core processor (2.2GHz) coupled with its 3GB RAM. Speed was clearly experienced all over. 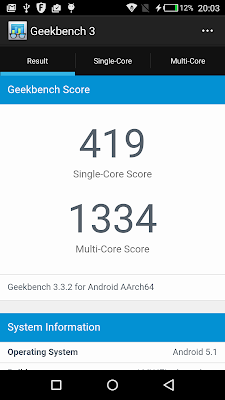 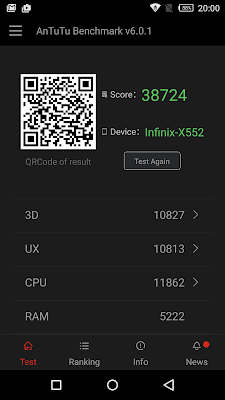 I think they tried giving Zero 3 more battery juice, despite limitation from its flatness, it lives on a Non-removable 3030mAh Battery, this is better than the previous Zero models. We played a 720p HD video using MX Player on 90% high brightness, the battery went from 35% to 15% in 2 Hours. From our experiments and understanding of such performance, we would would advice you keep brightness down, or else it doesn’t serve you more than 1 & Half days on 3G.

What We Disliked:
Heating up, when you Launch apps, games and features that takes up energy, like Brightness, 3G Internet, it will definitely heat up, this also contributed to the battery draining easily.

What We Liked:
The camera is ready to go, producing awesome badass photos doesn’t take much, not need to adjust anything unless you insist to tweak and optimise before or after taking photos, this will be loved especially by ladies, with Zero 3’s camera you might want to ditch your Instagram filter options and post your photos straight up.
The device also proves to be really fast, the 3GB Ram and New procoessor was great. I was running over 10 Apps and so far NO lagging since I had been using the Infinix Zero 3.

We think the Infinix Zero 3 is one more huge step towards an awesome mid-range smartphone with some nice high-end specifications, the camera, display, speed and weightlessness of Zero 3 tells us there are already too many reasons to love the smartphone which means it is worth buying.

RReviews
Tecno corporation creates amazing quality digital gadgets at an initially low price for the low ends. Developers and…
AAndroid
It was a good news after we got an upgrade alert for Marshmallow on Infinix Hot 2 last…
GGuides
The best places to repair your Tecno, and Infinix phones at CarlCare in 2023, their offices/centers, and all…
BBest List
There are 1 billion smartphone owners around the globe and every day 1.8 million smartphone are sold. The…
MMobile
Infinix is working greatly on this new device which we had been talking about for the past 2…
RReviews
KAMISHI is a leading brand specializing in power banks and smart technology. Their products boast creative designs that…