How to Add Card and Use Apple Pay in Canada (For iPhones, iPad and Apple Watch)

Today, Apple Pay had finally announced that its services had expanded, hence can be used by Canadians with credit cards from CIBC, RBC, ATB Financial, and Canadian Tire Financial Services.

Apple Pay is Apple’s mobile payment solution. It works with the iPhone 6s, iPhone 6s Plus, iPhone 6, iPhone 6 Plus, iPhone SE and Apple Watch. Apple Pay will not work on the iPhone 5 or iPhone 5s because it lacks the necessary NFC chip but the small good news here is it will work if you connect your Apple Watch to it.
In addition, iOS users can make in-app Apple Pay purchases with Touch ID-equipped iPad Air 2, iPad mini 3, iPad mini 4 and iPad Pro.

In November 2015, their support for American Express credit cards was launched for Apple Pay debits and had already began issueing the service across Canadians. The good news seems to have come to fulfill that criteria. 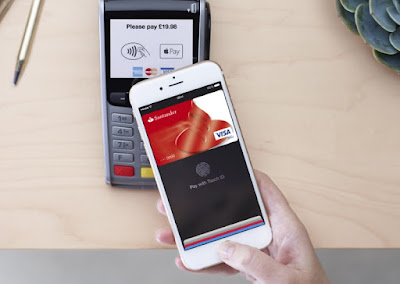 How to Add Card to Apple Pay on the iPhone and Apple Watch:

Launch the Wallet App, known is Passbook from iOS 8. This launches the Apple Pay.
You will be asked to add a valid credit/debit cardd and also asked for your Apple ID password.

However, the method for adding a card to Apple pay through your Watch is different from that on the iPhone.
So, when you pick up your phone, open the Apple Watch app, scroll down to Wallet and Apply Pay, now tap “Add” where it displays the card.

To do this especially at a point of sale, once you reach the where the merchant presents you with total amount due, Now  enter your Finger on Touch ID, then Hold your iPhone close to the terminal. The terminal may ask you to choose Credit or Debit card. To make it faster and easier, you can simply choose a card to use as default for all your transactions in case you added more than One card in your Apple Pay.

Making Payments with your Apple Watch

Open your Apple Pay in the  watch, unlock it with your passcode, then double-tap the bottom, this will bring up list of cards/ Now place your Apple Watch close to the terminal as you’d do with the iPhone. The Watch should vibrate once payment is completed.

HHow To
As a fledgling business, the need for multiple SSL certificates is slim to none, but as you grow…
HHow To
If you had saved all your Contacts in your Symbian phone, and you insert a brand new SIM…
BBlogging
Blogging in 2022/23 is uncontrollably going rival nowadays, everybody wants to own a great blog, it could be…

Read More
HHow To
If your goal is to make a permanent project, as opposed to a breadboard setup, then you will…
HHow To
Some blogs have nice responsive themes or templates but they are not 100% perfect till you do some…
HHow To
For more than a year, I ignored the use of a custom e-mail address and kept using Hotmail…