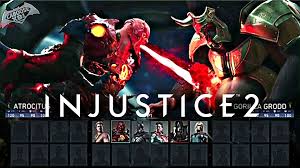 It is no news that a new Injustice game with the moniker Injustice 2 is coming up soon, but a new twist has been added to the news. Actually, there are multiple twists.

One is that a mobile version of the game will be coming out, just like the debut Injustice game. This was revealed recently at the Comic-Con event by Ed Boon, creative director at NetherRealm Studios, makers of the Injustice game.

Also, just like the first Injustice game, there will be a comic of the game to go along with the mobile version. As Boon said at the event,

“I always describe the mobile game and the comic as the two children the game had that graduated and went on.”

From that statement, it is safe to conclude that every installment of the Injustice game will be released with a mobile game and comic.

The last twist to this story is an exciting one. At the Comic-Con event, it was also announced that two new playable characters, Wonder Woman and Beetle will be added to the game. With all these announcements and new twists to the upcoming game, it is quite clear that Injustice 2 will out-do its predecessor in terms of playable characters, platforms and in the story itself.

The Comic-Con event is still on, so more announcements and details about the game are expected to still come out before the event ends. Perhaps the release date of the mobile Injustice 2 game and comic will be announced.

AAndroid Games
This post covers all you need to know about about downloading The Legend of Sleepy Hollow for Android…
HHow To
This post will show you how to Fix or bypass License Invalid on Dungeon Hunter 5 and Other…
MMobile
After so much anticipation on The Walking Dead: Michonne which surfaced last month, February 2016, the game was…
MMobile
If you go through our Game archive here, you’ll see some nice games had been released this year…
AAndroid
The Mortal Kombat Games’ journey which began in 1995 has had a Superb Growth and Audience over time,…
WWindows
Just about 5 months ago, there were rumors about Shadow Fight 3 coming to both Android and Windows…