The Google Play Store is the one-stop location for all users of Android, especially those who love and use a lot of apps. While downloading the apps and using them may be exciting, the process of updating the apps at regular intervals is often a pain in the neck.

Some apps, in fact, almost all of the major and most-downloaded apps in the Google Play Store are updated at least once monthly, which further compounds the update problem. Those to be pitied most in this situation are those who play heavy games like Grand Theft Auto, The Walking Dead and EA Real Racing. The apps possess extension files and APKs that are always larger than 2GB, and updating them could last forever.

Google has now rolled out a new algorithm for updates in the Google Play Store to fix this problem. In the event of an app update via the Play Store, the algorithm called Bsdiff will compare the installed components of the app being updated, to the new components available in the update installation file (APK), and will only deliver these new components to the app in the update, as opposed to the former algorithm which downloads the whole new APK and re-installs it.

According to Google, the new algorithm reduces the size of app updates by up to 50%, since it only delivers a patch to the existing app components.

To this end, Android App Developers have been advised by Google to decompress native libraries in their apps, in order not to hinder the smooth performance of the Bsdiff Algorithm. 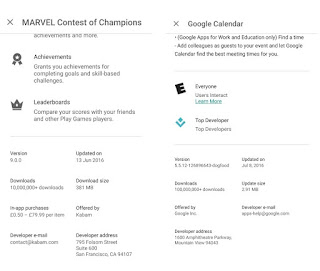 Now, when you view installed apps in the Play Store, you will see a new Update Size listing along with the other application listings, which shows the size of the app update, if available. If it’s a new app being viewed, the actual Download Size will be seen in place of Update Size.

RReviews
As we may already know the Infinix Hot X507 is one of the most sold smartphone this 2015…
HHow To
A promise had been kept! Infinix Hot 2 ( X510 aka The Hottest One) had finally gotten Android…
iiOS
Apple’s latest flagship smartphone, the iPhone 5, has been one of the most popular phones of the last…
RReviews
The Music phone is Back! Tecno Boom J8 had been officially launched 31st March 2016, it is the…
BBest List
Those who are looking for a smart phone within the range of 500 dollars are at the tight…
RReviews
The Brand new mobile devices recently released by Samsung’s flagship, the Galaxy S5 and The Galaxy Note 3…