Meet Nintendo Switch – The Revolution of Nintendo’s console for 2017

Nintendo’s console for 2017 is almost around the corner for those gamers who had been a loya fans of the Nintendo company and their games since its inception over 15 years ago. From the preview of the upcoming Nintendo console, we realised that the game is a total revolution and amazingly something unique and difference from its rivals, the Sony Play Station and XBOX.
Nintendo kept 2 things in place, mobility, so users can take it anywhere, they also maintained bulkiness for heavy users who would enjoy it on big screen. 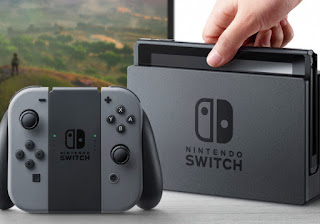 Quickly flashing back in April, Nintendo confirmed that its NX console would hit the stores in March 2017. Now, we are sure to get our first look into the “next home gaming system” in a three-minute preview trailer, we also finally know its name: the Nintendo Switch.

As rumored, the Switch is a console/hand-held hybrid which will connect with a TV, be contend to be used on the move, and uses cartridges (Nintendo is not dropping usage of cartridges yet). There are things to bear in mind about the Nintendo Switch’s accessories.

The Controllers: Joy-Con and Joy-Con Grip

You’ll be able to see in the video, the 2 controllers (Nintendo is calling them Joy-Con) will attach to the central unit (Joy-Con Grip) to act sort of a single controller. they will additionally slide onto the side of the standalone screen unit, making it similar to the Wii U.
In addition, the Joy-Cons will be used for multiplayer gaming on the move, and there will be a a lot of traditional “Pro Controller” choice available.

AAndroid
As we initially published a fresh flash news about something Great which the Infinix Mobility Team is Cooking.The…
TTech News
Google, the number One rated website company in the world at this time has finally launched its much…
RReviews
Most of us have smartphones and Tablets, we know there’s Google but not everyone makes the best out…
MMobile
Well-well, I believe Etisalat,one of the top leading Mobile Operating network in my country Nigeria with its awesome…
TTech News
When you log in to your Blogger dashboard from 28th of July, 2015, you should see a Notice…
TTech News
It was about 6:35am in the morning, when I woke up from sleep, I took my  phone,…