It’s less expensive than the PlayStation 4 Pro or the magical XBox One S, yet seems to be the one and only console to break a world record to be the Most powerful console on earth.
This console goes for just £150  (a hundred and fifty Pounds). What are we referring to?
It’s the Nvidia’s SHIELD TV – the small but mighty Android TV streaming service that doubles up as insanely powerful gaming rig.

This console according to rumors, is so powerful, in fact, it can play games such as The Witcher 3 (below) at 1080p resolution and 60 frames per second.

Rather than the old school, yet effective, way of having a dedicated graphics card, SHIELD taps into super computer farms placed strategically around the world which helps play the games.

NVIDIA is very confident about the console and ensures that you play with it, some of the newest games available now with the highest graphics quality and awesomeness. Some the games include: various Batman games, Tomb Raider and moe that are yet to be revealed. 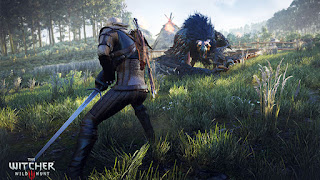 Since the inception of cloud gaming, according to NVIDIA spokesperson, “Console gamers are locked into a hardware spec for several years,” This is a gap that the Console had come to fill.

“It also delivers a smooth 60fps gaming experience at up to 1080p resolution, whilst PlayStation Now is capped at 30fps and 720p resolution.

“We also regularly upgrade the GeForce GTX GPUs in our GeForce NOW servers so that the gaming experience gets better with time.

“GeForce NOW’s cloud servers currently provide performance that is superior to consoles such as the PS4, and a year from now they will offer twice the performance.”

However, we have to Point out that YOU WILL NEED A VERY HUGE AND FAST INTERNET CONNECTION to use this and enjoy its cloud gaming.

Nvidia recommends a 5-10 Mbps internet download speed to use GeForce Now… which is surely super quick.

You’re also Advised to use a 5GHZ router.

In case your internet speed doesn’t meet up with the above, no much worries, you’ll still be able to play games, but expect some lag and the resolution to drop.

However, once you’ve got internet that is fast enough, the SHIELD could be a viable alternative to the mainstream consoles.